With the development of the times, more and more parents send their children abroad to enjoy the best education. However, for the new generation growing up in a foreign land, they left homes and drifted here and there, what on earth were they looking for during their lifetimes?

Perhaps as they grew to adulthood, they would eventually return to the homelands under the force of their ethnical genes, work in the birthplace, feast on the natural beauty and let the cherished dream bloom.

Lin is such a girl. When I listened to her telling her design as well as stories, she narrated them gently and leisurely. Her works can ultimately reveal her patience and steadiness. I reckon that good design must firstly be a partial extension of the designer’s personality.

Lin’s works not only express her love and research on the indigo-dye but also imply her sorrow when noticing the painstaking work and meagre income of the local veteran craftsmen in Yunnan. This time I was invited to attend Lin’s exhibition in Lidu Garden. 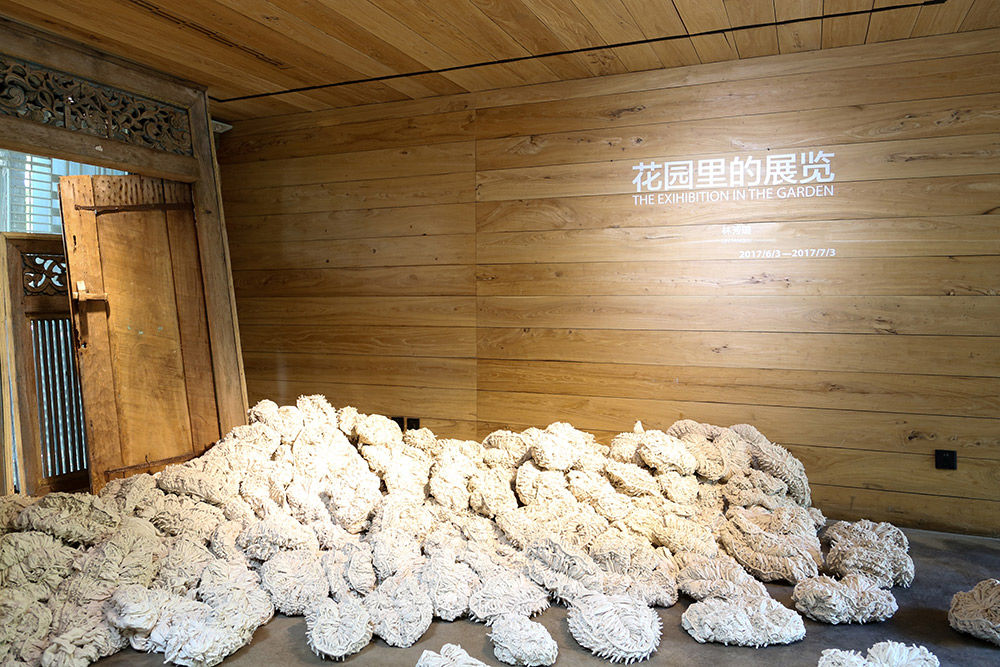 Q: Could you give us a brief introduction to your recent works?

A: 'SHE' and SHE’S' were made when I was in a village in Dali, Yunnan, where the local craft is about a thousand years old. The two works are huge and dense, which suggest the sense of memory that I wanted to mould at the beginning. 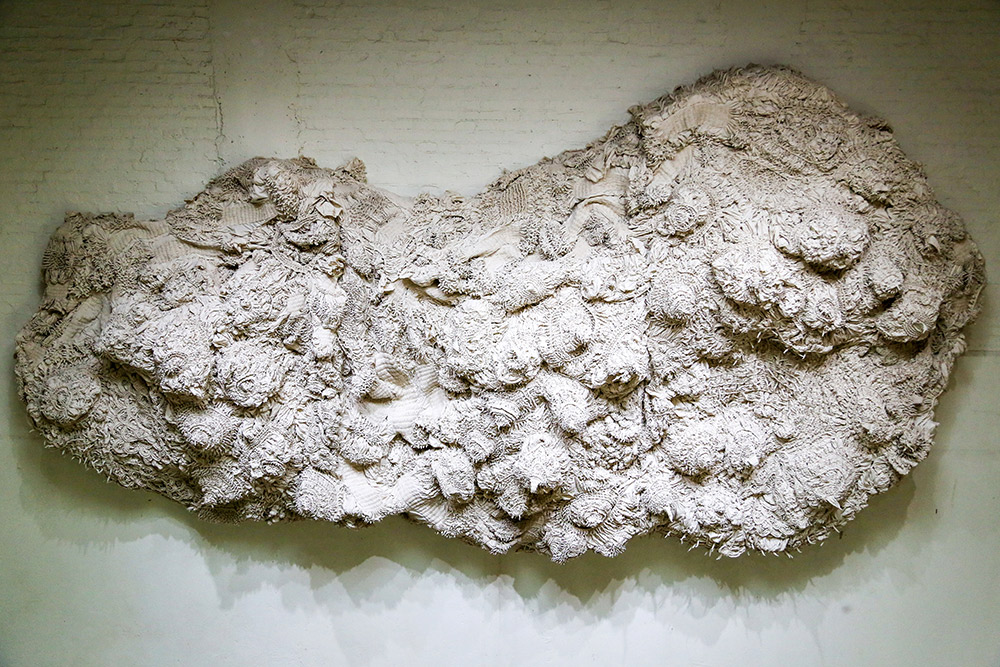 Originally I constructed the conception in Beijing, and then completely overturned it after arriving at Yunnan. Since the local cultural atmosphere could always bring me different feelings, after the simplification and refinement, my mind would grasp certain abstract ideas. I designed the works at that time and at that place, the works are the demonstration of my specific life experience. Thus the concept of time is also my emphasis; because time can be reflected via the non-stop working process. I hope my work could bring people different feelings. Such as OCTOPUS, some consider it peculiar; others find it spectacular. This is what I expected as the 'inclusive art'.

The pristine state of white cloth is the most primitive, but also the purest and raw state; it could bring the audience a combined experience of visuality and tactility. I believe that after personally seeing, touching and feeling, the audience will gain different comprehension and recognition compared to before. 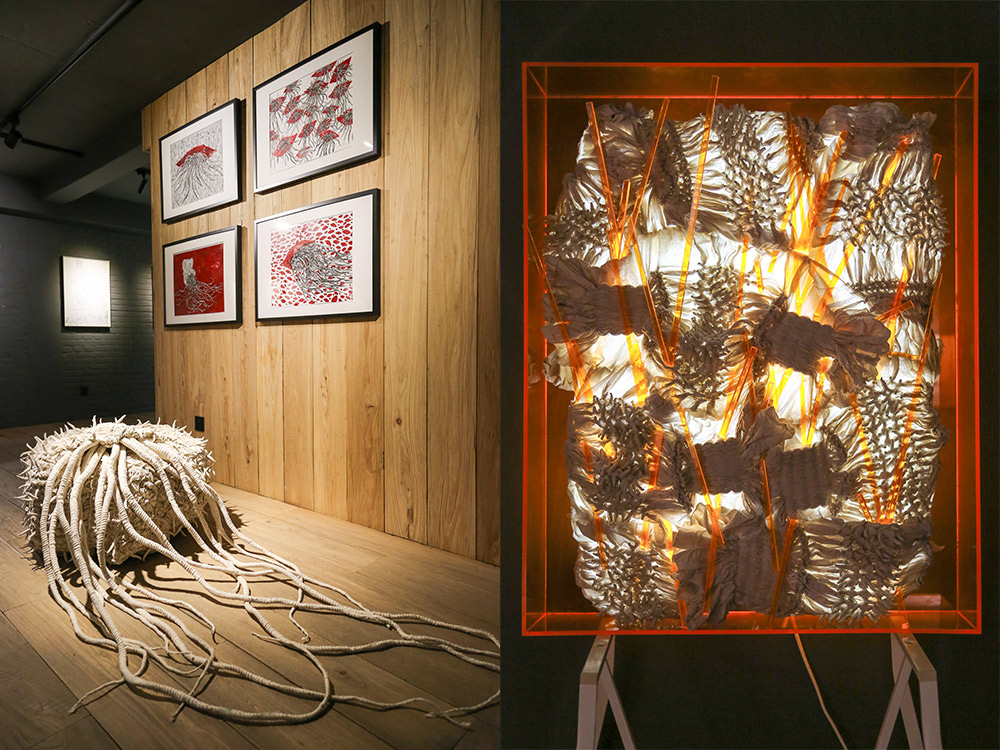 Q: Can you share your production procedures and processing steps?

A: During the production, I tried to keep the consistent control. In a large construction site in the southeast Beijing, I paved four large planks on the ground, drew the basic forms with markers, and stood in front of them, considering what shape should they be cut into. 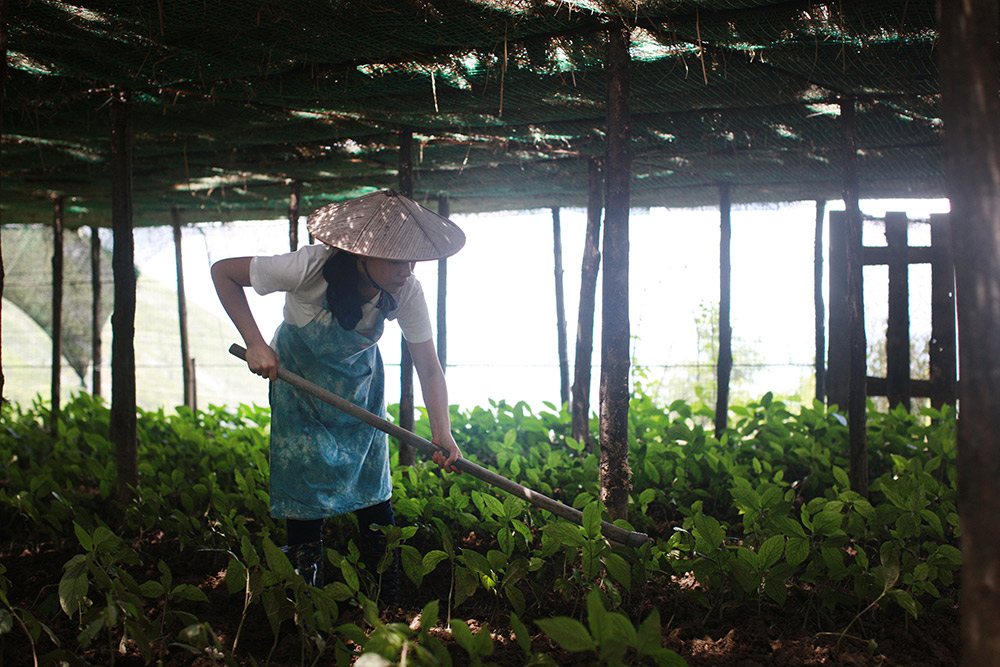 The production of dyes consists of five procedures: soaking, indigo-dyeing, fermenting, catalysing and waiting. By fermenting the raw material in the dye vat to make the dyestuff, you soak the cloth in it and take it out for the air oxidation, and the cloth will turn blue. 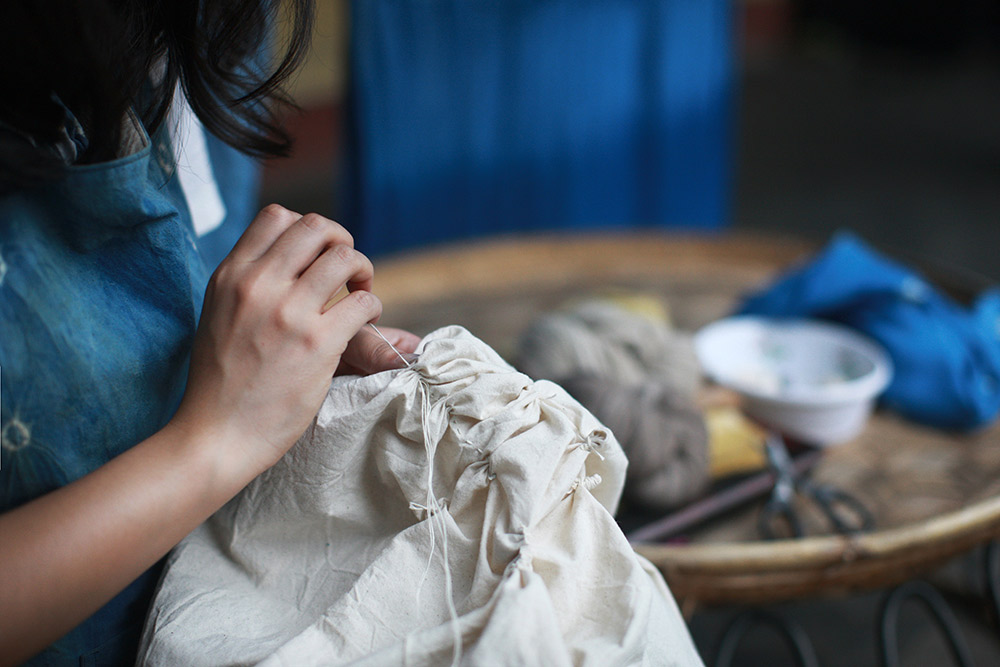 The Bai ethnic’s dye technique is characterised by that the process, from kneading silks, knotting to suturing, is done by needle, thread or relatively simple assistive tools. When you put the cloth in the dye vat, the knot cannot be entirely dyed, and therefore once the sutures are taken out, the pattern will turn out to be mottled but vivid, halo coloured but with an earthy flavour. 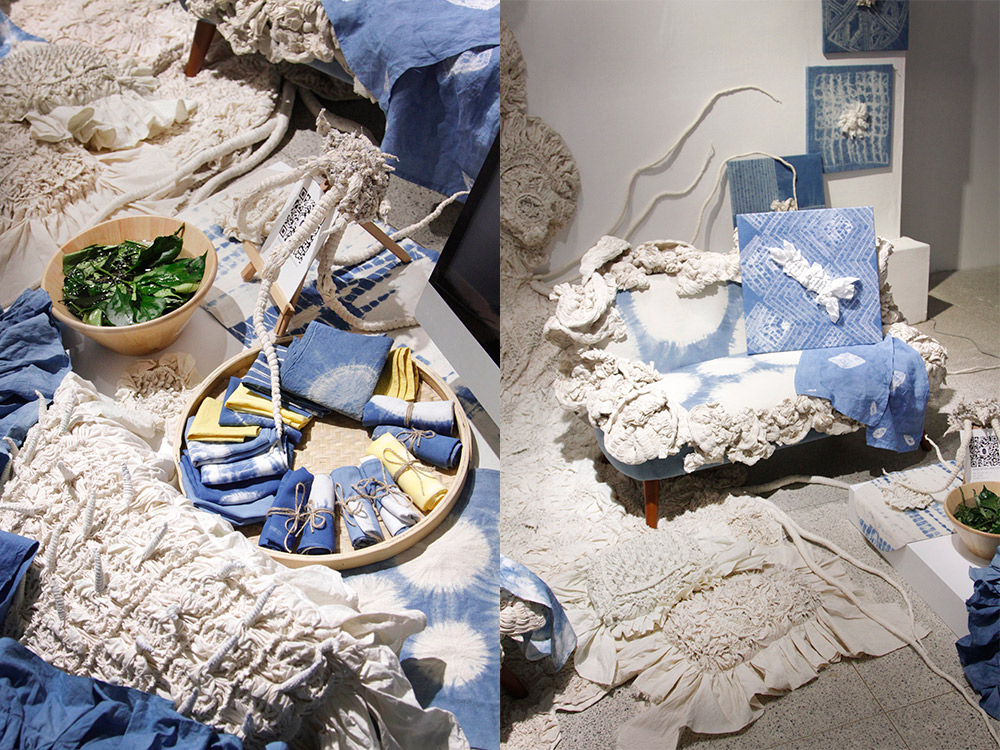 I summarised the traditional sewing method, then inspired to create modern abstract patterns other than traditional ones, and moulded various three-dimensional forms by them. Approximately 30% of these forms are of rich textures, and can be directly applied in the future design practice. 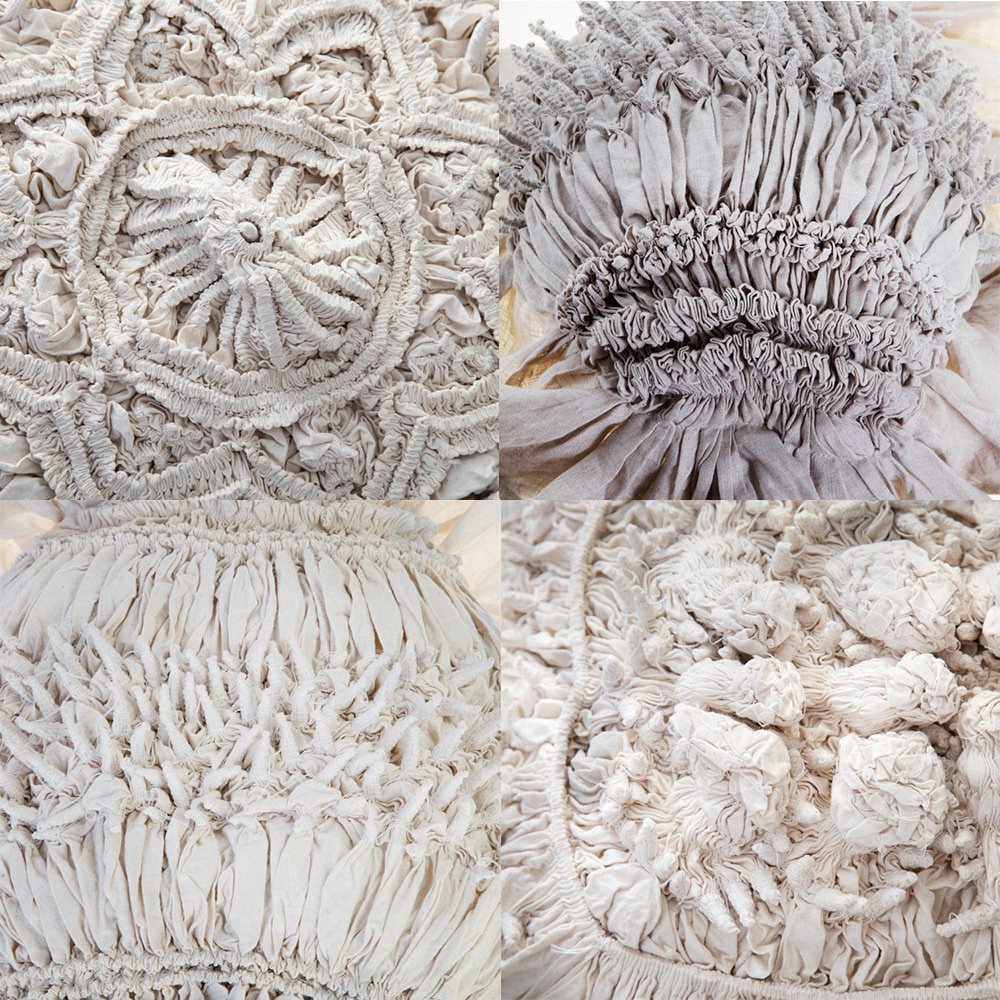 Q: What’s your reflection of the indigo-dyeing in your works?

A: I won’t stop the passion for the contemporary art. Combining with product design, I hope to make something both artistic and cosy. 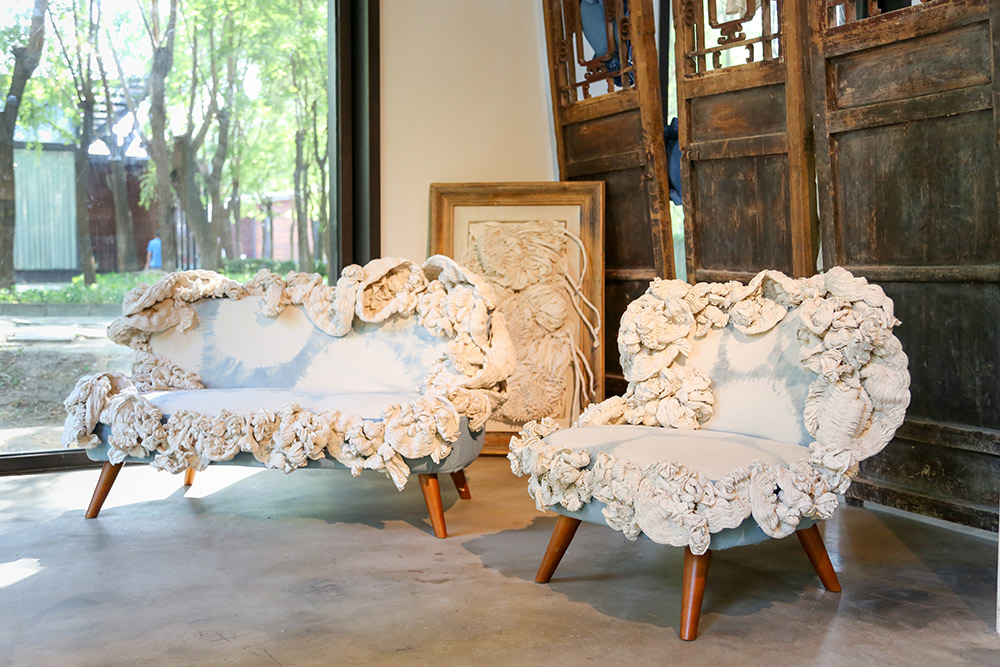 The reason why I’m obsessed with indigo dye is that I insist the Chinese design innovation should rest on the traditional cultural foundation.

I found that in the thousand year’s evolution of dyeing, the indigo-dyeing is the only one that was not weeded out by time, from which you could notice its value. Nevertheless, when I arrived at Yunnan, I suddenly realised that the local youngsters had already quitted it. Only the grannies are still dyeing. They are in their sixties or seventies, living a hard life. They do the farm work and look after kids, without being educated during the lifetime. 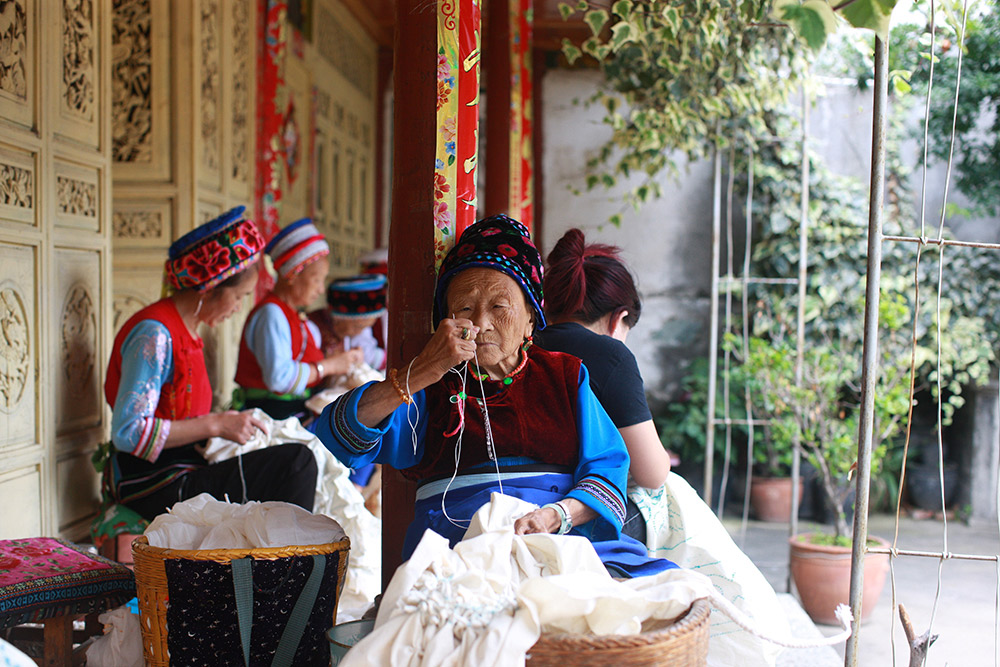 I felt frustrated and sank into mixed feelings when seeing them, and I was overwhelmed by this mixed love-hate feelings when communicating with them, so I could not help blending these feelings into my works. 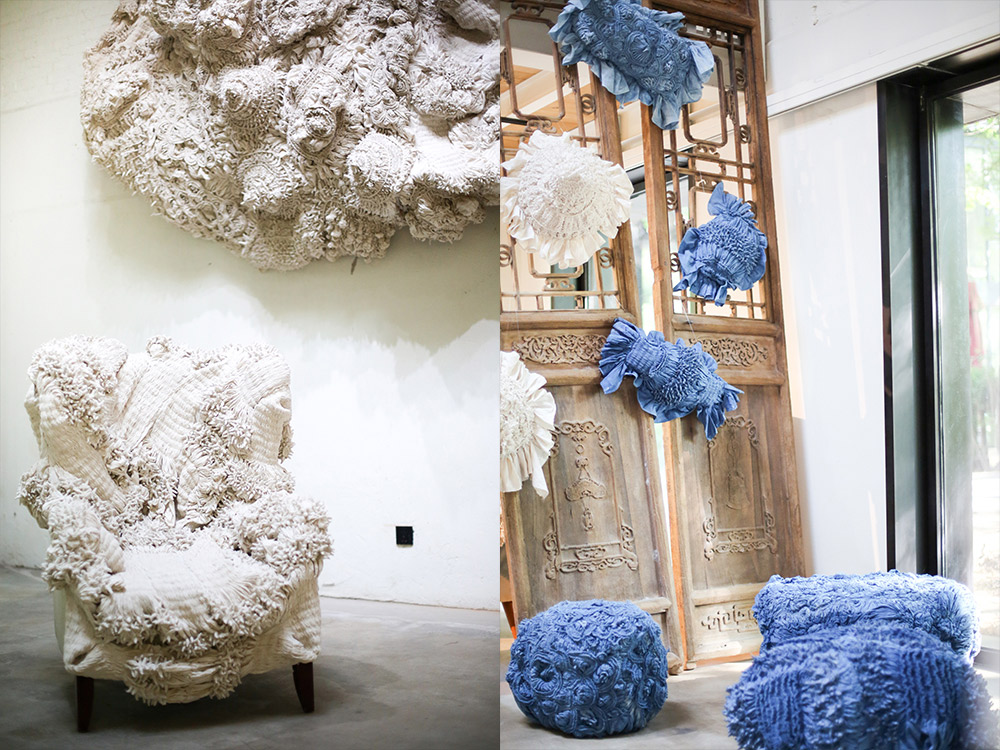 In the past, we heard of tie-dyeing, but we never realised it could be so pretty and practical as well. Lin’s wish lies in protecting the tie-dyeing, furthering the technique inheritance, and continuing Bai’s advanced wisdom and ideas so that Bai’s culture could withstand the global cultural shock, avoid descending to the vassal or even ending up collapsing.

Only by broadening the crafted beauty with small products and showing the audience another real and artistic possibility can realise the universalisation of national culture. Consequently, this not only improves the aesthetic requirement of contemporary life from the material level but also opens the door to the revival of traditional culture from the spiritual level.

39
www.linfanglu.com
You may also like
Wallpaper* show caption back